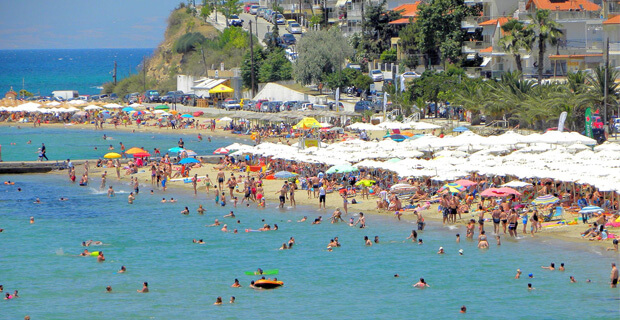 Nea Kallikratia is at a distance of 35 km. from Thessaloniki, the most focal point of Halkidiki, offering you many attractive options for your enjoyment

Nea Kallikratia is a town of Halkidiki, with 6.204 inhabitants according to the census of 2001. It is the seat of the municipality and the municipal district. The main occupations of the inhabitants of the region are tourism, fishing and agriculture.

Nea Kallikrateia founded in 1922 by refugees, hailing from Kallikrateia Eastern Thrace and settled in the area where there was a dependency of the Monastery of Xenophon Mount Athos, who had called stoma.

The area seems to be inhabited since the Neolithic era. Archaeological research at Nea Kallikrateia brought to light a headstone dated to 440 BC, with gable representing a young woman with a dove on her left hand. This finding is kept in the Archaeological Museum of Thessaloniki.

The family-run Iris Hotel is centrally located, just 120 meters. from the beach of Nea Kallikratia Chalkidiki. It has a bar and air-conditioned rooms with free Wi-Fi and a balcony with city views.

All 22 rooms at Iris Hotel have a TV and fridge. Each has a private bathroom with shower.

A breakfast buffet is served in the dining room. Within 3 minutes walk there are restaurants and shops.